The team finds that retaining a client is never easy. With Billy experiencing writers' block and Greg unashamedly hitting on the beautiful Tamsin, the outcome doesn't look promising. 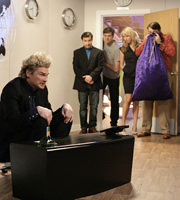 Billy is experiencing writers' block and Greg is unashamedly hitting on the beautiful Tamsin. Meanwhile Keaton stalks the office stealing happiness and placing it in his big bag, and Emma feeds off the new drink "diet stuff" in a bid to keep herself slim.

Matters become worse as Keaton decreases Emma's desk size by 30 per cent forcing her to lose 30 per cent of her weight to remain in proportion to her desk. Billy's writer's block is eventually unblocked, Emma embarks on a passionate weight-related rant and Keaton is taught an important lesson.

This episode was originally scheduled to be broadcast on the 3rd February 2010 at 10pm. However, it was moved to a 'graveyard' slot on Thursday at the last minute by the schedulers, presumably to stop the channel suffering another prime-time ratings blow. News story