Following an unsuccessful focus group the team are called into boss Clive's office for a grilling. Clive gives the team 24 hours to prove their creativity.
Preview clip 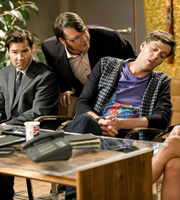 Following an unsuccessful focus group regarding one of his ideas, Billy is called into boss Clive's office with the rest of the team for a grilling.

The outcome of the focus group has resulted in the agency dropping six places in the creativity league table. Clive is furious and gives the team 24 hours to prove their creativity and resolve the matter, otherwise they will be banished to the basement to work on leaflets.

Terrified at the thought of the basement, the team goes all-out to come up with creative ideas. Keaton declares himself the new Banksy and places graffiti on everything in sight, while Emma acquires her own stalker Peter, who she decides to put forward as the "office shout-at man".

In fact, everyone except Greg manages to impress Clive, but just as he's about to face a life of working on leaflets, the team rallies round to help him out.

How To Be Creative

HHH&H has slipped down the ad agency creativity rankings, so Clive threatens to demote anyone who can't prove they're creative.