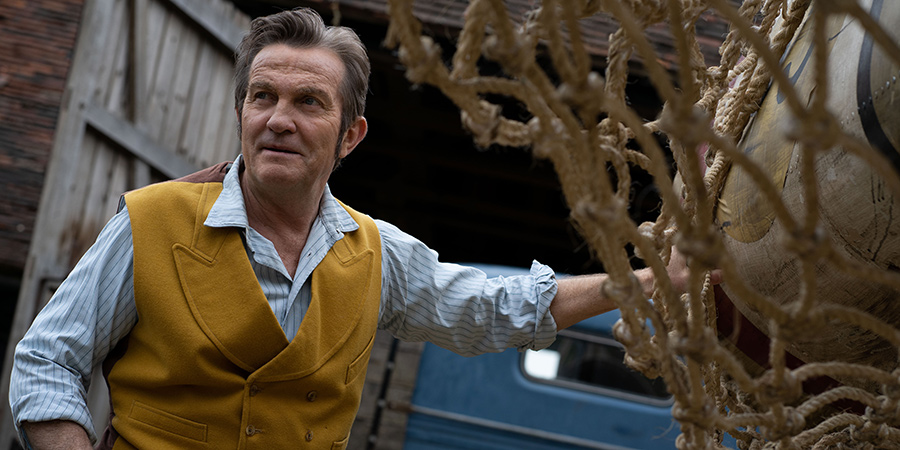 Series 1, Episode 1 - In Which We Meet The Larkin Family

Excited and busy, plans for the approaching May Day Fair are underway in the village but everything is not as peaceful as it might be in the Larkins' world.

Excited and busy, plans for the approaching May Day Fair are underway in the village but everything is not as peaceful as it
might be in the Larkins' world. Mariette is keen to leave home and see the world.

Ma and Pop are devastated and doing their best to convince her to stay. Even the arrival of suave Tom Fisher doesn't seem to have the desired effect. Meanwhile Pop is trying to save Miss Pilchester from having to sell her house to pushy Mr Rance, an outsider from London. Ma is furious that village gossip (particularly from the Normans) about Pop suggests he is uncultured and illiterate.

Pop buys Ma a Rolls Royce to help rectify matters and Ma has her heart set on Pop being Master of Hounds and taking the crown from Alec Norman (who is still fuming that Montgomery Larkin scraped his sports car). Things come to a head at the May Day Fair Charity Auction where Alec Norman mistakenly buys a 'Turner' painting that turns out to be a Montgomery Larkin original. But with the arrival of the tax man things are looking bleak for the Larkins.

This episode is currently available on ITV Hub

Bradley Walsh is a perfick Pop in ITV's Darling Buds Of May reboot.

It is the kind of production that the new secretary of state for culture, Nadine "Mad Nad" Dorries would greatly approve of, mainly because it is precisely the kind of opioid atavistic tosh she churns out in her novels. It's a sort of Brexit Television, set in a post-war green and pleasant England that never was and never will be, but for which so many feel an overwhelming nostalgia (and so much so that they're prepared to vote in their millions for a better yesterday).

Ian Hyland says ITV's The Larkins is not stuck in the past but has been revived to have a modern feel with plenty of diversity - that's the next five Sunday nights sorted.

ITV remake is the perfick warm hug we desperately need on Sunday nights.

There's nothing 'perfick' about this clumsy remake.

Never mind the all-star cast. Every eye was on the relative unknown, as Sabrina Bartlett took on the mantle of Mariette, the original Darling Bud Of May.

Darling Buds Of May reboot is a warm comfort pudding.