Rob begins work on 'Plan A' - finding out who Duncan's first love was and asking her to the wedding as his 'plus one'. But when he discovers that she's in a coma, Rob decides to track down his own high school crush, Nicola Dare.

Further complications arise when a fun run, a tramp and a five-year-old girl are thrown into the mix, and Rob starts to suspect that Duncan is just better than him... 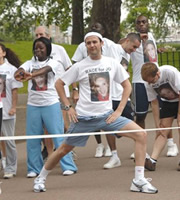 Rob is invited to the marriage of his ex-girlfriend, Linsey, to Duncan James from boyband Blue. In his attempt to get one up on his new nemesis, Rob decides to find out who Duncan's first love is and ask her to the wedding as his 'plus one'. However, having found Jo, he also finds that she is not as mobile as Rob had hoped because she is in a coma. So, as a viable alternative, Rob tracks down his own high school crush, Nicola Dare. However, he quickly ends up insulting her and so, in order to impress Nicola and regain her respect, Rob enters a charity fun run to raise money to fund Jo's treatment. But after a misunderstanding with a tramp and a five year old girl, it just further proves that Duncan from Blue is just better than him.