Series 1, Episode 2 - Black And White And Red All Over

More than ever, Rob needs to find an impressive girl to show his ex what she has missed out on. Going out with your brother's girlfriend's sister was never the best way to find love, especially when you're dressed as a Panda. 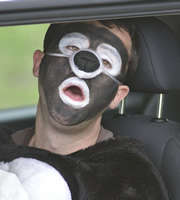 T4 is featuring the build up to Duncan and Linsey's wedding in reality show One Love. Rob really needs to find an impressive girl to have on his arm if he's to show his ex just what she has missed out on. Enter Rich and his girlfriend's sister, Abby; a diva of a West End star who is totally spoilt and totally gorgeous. In an attempt to bag this beauty, Rob agrees to go to a bad taste party with Abby, dressed as a panda. A car crash leads to a nasty case of whiplash and Rob offending two paramedics, T4's Steve Jones, a million TV viewers and Duncan from Blue.