The BBC has announced that the format will see the host present "a hilarious lesson in TV history [and] a demonstration of what is required to make each of the main TV genres".

Line Of Duty, Dixon Of Dock Green, Fanny Craddock, Who Do You Think You Are?, The Grove Family, Dr Finlay's Casebook, EastEnders and Barry Bucknell's Do It Yourself are amongst the shows the comedian will be selecting clips from.

World Of TV will mix both archive and, like his previous ITV series TV Burp, recent programmes, including Grand Designs and Coronation Street.

Hill says: "It's about time someone blew the whistle on how these TV shows are put together and it looks like I'm the man for the job. Watching TV will never be the same again! I predict this series of programmes will be required viewing for all students of TV. We're talking TV landmark... jus' sayin'."

The series is being produced by Nit TV, Hill's own company. The business has previously made his ITV panel show Harry Hill's Alien Fun Capsule, and delivered the recent Channel 4 series Harry Hill's ClubNite and Reasons To Be Cheerful With Matt Lucas.

This new commission will see Hill returning to BBC Two, the channel that gave him his TV break in 1994 with Harry Hill's Fruit Fancies. Filmed in black and white and with no dialogue, the ten-minute episodes saw the comedian performing sketches with celebrity guest cameos.

Harry Hill's TV Burp ran on ITV for 12 series between 2001 and 2012. It also led to Hill voicing home video clip show You've Been Framed for the network.

Kate Phillips from the BBC says of Harry Hill's World Of TV: "Harry is the undisputed master of unearthing unintentionally funny moments and there will be plenty of them in this laugh out loud series."

Mobashir Dar, executive producer, quips: "If you like Harry Hill, the world and TV, then you'll love Harry Hill's World Of TV." 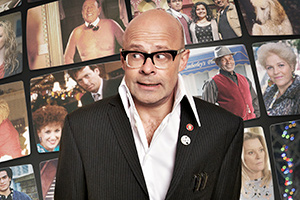