Young comic talent Jack Whitehall, who is now starring in Channel 4's brand new drama Fresh Meat, takes to the stage of Hackney Empire and reflects on My Funniest Year, 2005. 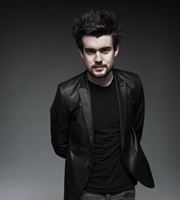 Jack chooses 2005 because for him it was a momentous year - the year he turned 17, left school, and lost his virginity in Antony Worrall Thompson's gastro pub.

There was also Live 8, the hunting ban, the introduction of 24 hour drinking and the launch of YouTube.

Jack also takes a pop at noteworthy TV shows of the year, including the launch of Come Dine With Me, and delves into the public reaction to the celebrity weddings of Prince Charles and Camilla, Peter Andre and Jordan, and Ken and Deirdre in Coronation Street.