Al Murray looks back to 1997, the year when the world had gone Spice Girl mad, Elton John turned 50 in a typically understated way, and Labour swept into power. 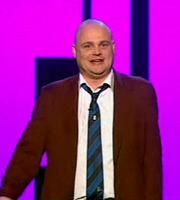 Comic pub landlord Al Murray takes to the stage at the Hackney Empire to escort his audience through his Funniest Year, 1997.

Clad in his characteristic blazer, shirt and tie, Al strides onto the stage clutching a pint of beer as he tells the raucous crowd why he's personally chosen 1997 as a trademark year. It was the year that his now ex-wife ran off with a Frenchman, the Spice Girls became the biggest pop phenomenon since the Beatles, and Tinky Winky from the Teletubbies was 'outed' as gay.

Al's comedy extravaganza explores other unforgettable popular culture moments from the year - the detailed examination of Bill Clinton's manhood, the launch of Channel Five, and the popularity of alcopops.