Following the suicide of his best friend, solicitor Martin's world falls apart when his wife tells him at the funeral that she slept with his late friend - twice. 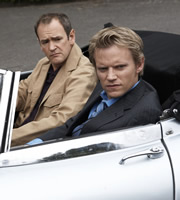 After the suicide of his best friend, Carl, solicitor Martin's world falls apart when his wife, Jen, tells him at the funeral that she slept with his now dead friend.

As the once happy couple struggle to hold their marriage together, Martin's pathologically immature but endlessly charming friend, Patrick, re-enters their lives and decides to help Martin through his troubles in his own inimitably hedonistic way.

Meanwhile, Jen receives support and advice from her best friend, Liz - who also happens to be Patrick's former fiancée.

Patrick discovers to his horror that Liz has now hooked up romantically with his business partner Harry who, in turn, is trying to force Patrick out of Qcumba - his mail-order clothing business.