Patrick tries to help Martin cope with his marital problems by subjecting him to an energetic reintroduction to the life of a single man. 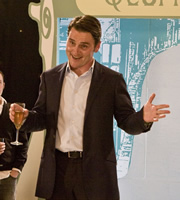 Patrick tries to help Martin cope with his marital problems by subjecting him to an energetic reintroduction to the life of a single man, involving vigorous mountain bike-riding, rounds of golf and marathon computer games sessions - fuelled by a diet of pizza, beer and skunk.

On Liz's advice, Jen decides to apply for a job - only to discover that it is based in Norwich. She can make a new start and leave Martin, taking their young son, Dan, with her.

Martin, meanwhile, discovers that Carl had a second mortgage on another house and, as a result, his widow Leigh is now bankrupt. He is also under pressure from his boss, Sarah, to hang on to the lucrative Qcumba case and attempts to arbitrate between Harry and Patrick - who are both refusing to budge in their battle for control of the company. Martin's embarrassment is later multiplied when he walks in on Patrick and Sarah in bed together.

Desperate to prevent Jen from leaving for Norwich, Martin goes to see her new employer, Darren. Jen, however, is not pleased. Patrick later sabotages the Qcumba spring launch, which Harry has organised, and gets sacked.

Patrick and Liz have set up a meeting between Martin and Jen, but it doesn't go well and Martin takes a joint from Patrick and has a psychotic episode in a supermarket - prompting Jen to rush to his hospital bedside.