The wedding looms and there is an atmosphere of impending mayhem as everyone converges on the country house hotel where the reception is to be held. 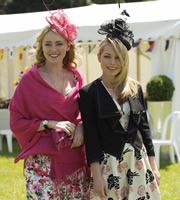 The wedding is looming and there is an atmosphere of impending mayhem as everyone converges on the country house hotel where the reception is to be held.

Humiliatingly, Martin is now a dogsbody at Harry's beck and call, and even has to take on the job of stand-in when the first choice best man misses his flight.

Patrick, denying he is upset by Liz getting married, turns up at the hotel and runs up a huge bill against Harry's account, while Anita finds out about Dev's misplaced crush and confronts a startled Leigh.

Later, Harry orders Martin to keep Liz's divorced parents apart. Martin is pleasantly surprised when his schoolboy crush, the gorgeous Ally, is one of the wedding guests. She is now divorced and delighted to see Martin again. Jen and Ally, however, do not hit it off.

Liz's dad, Frank, goes missing and Martin recruits Patrick to help find him and get him to the church. Patrick vows to tell Liz his feelings. He and Martin have to take a lift on a tractor in their dash to get to the wedding on time.