It's flower girl day. This is Asif's favourite day of the month, as his love interest will be coming in to tend to the office plants. 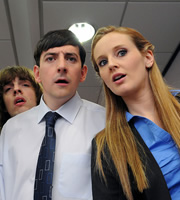 Asif has not been able to bring himself to speak to the flower girl as yet; instead he lurks in hallways and behind doors hoping she'll notice him.

Mike gives Asif a pep talk and tries to convince him to tell her how he feels. Asif decides to write a poem declaring his love. He sets to work, but it's not long before he gets stuck trying to find a word that rhymes with werewolf.

Gloria is on the prowl for gossip. Getting wind of Kenny and Tania's relationship, she pounces on Tania, who remains tight-lipped. In lieu of the truth, Gloria makes up her own version of their love life and it's not long before the rumours are flying around the office.

Kenny is mortified when Charlie begins to give him sex advice and he realises the extent of the rumours.

Meanwhile, Shelley has a hangover. She can't remember much of what happened last night or even how she got into work. She'll be fine if only she could find a quiet place to lie down, where no one will bother her...