Darrel's estranged dad Pat turns up doing odd jobs at Fox Cranford. Pat soon spots an opportunity to find a new home at Darrel and Shelley's flat having been kicked out by his ex. 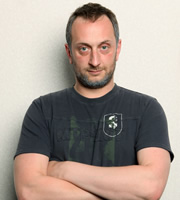 Shelley sees Pat for the unreliable self-obsessed idiot that he is and verges on the point of violence.

It's a big day for Asif - if he passes his driving test he's been promised a new set of wheels by his dad. And Kenny is stressed because everyone thinks he's boring now he's settled with Tania and sets out to prove them wrong.