Sitcom pilot about a group of post room workers in a no-win-no-fee law firm who drive their bosses and each other to distraction. There's a promotion up for grabs and slimy Darrel tries to impress Mike, the boss, and bag the job. Meanwhile Tania is pregnant and confronts Danny, one of five possible dads. 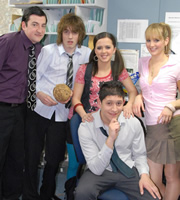 Straight out of school into a job they don't want, Darrel, Kenny, Asif, Shelley and Tania are looked down on by the solicitors they work for. All they want is to kill seven hours a day and earn a bit of cash. Their team leader, Gloria, has been at the company for years. She thinks she runs the place, but in reality she drives everyone mad, particularly Mike the long-suffering Supervising Solicitor.

A promotion is up for grabs which has divided the team. Asif pretends to be a hotshot lawyer to his Dad (when really he's just chief photocopier) and Tania reveals she is pregnant - but which of the legal team is the father?