Asif has a crush on hard-nosed solicitor Lee Ann and is determined to ask her out, but she only goes out with rich businessmen. 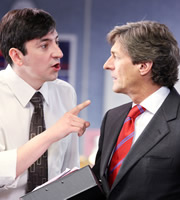 It's a baking hot day in the offices of Fox Cranford. Asif has a crush on hard-nosed solicitor Lee Ann and is determined to ask her out, but she only goes out with rich businessmen. When his dad turns up with a business opportunity - to sell ice pops - Asif decides to become an entrepreneur.

Kenny tries to get over his crush on Tania in the tried and tested way of drawing a picture of her naked. She nearly spots it and Kenny asks Asif to get rid of it. He promptly hides the picture in one of Mike's trial bundles which is then photocopied loads of times as Mike prepares to go to court.

Meanwhile, as Asif is making a fortune selling ice pops, Darrel overhears Lee Ann and Charlie talking about redundancies and convinces himself that he's facing the chop. He pleads with Gloria but spots a list with his name on. In the depths of despair, he spies a bag full of lager - Shelley's birthday present for her boyfriend...