It's Fox Cranford's 30-year anniversary, but the celebration is a damp squib involving Gloria's homemade cake. 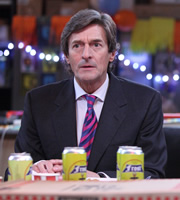 Kenny is panic stricken when he mistakenly thinks that Tania is pregnant, Mike is on the verge of meltdown, the firm is going under and the icy silent partner Miss Fox is on the prowl.

Tania and Shelley decide to hold a proper party to cheer Mike up. Kenny is in charge of the food and drink and with Darrel and Asif's help it quickly goes pear-shaped.