Kenny is back from a week on tour with the band for which he does photos and flyers. Tania has missed him, but Asif has missed him more. 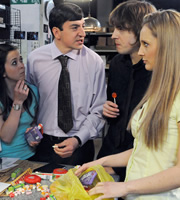 Tania has planned a motivational exercise involving hats and five-year life plans which puts the fear into Kenny.

Tania wants everyone to think about their dreams for the future, but Shelley can only think about her recurring nightmare featuring household chores.