Don is left agitated and anxious as he waits to hear if Sam will accept Brian's proposal.
Preview clips 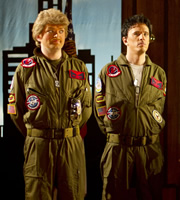 To distract himself from Sam and Brian's potential engagement Don joins Eddie's amateur dramatics group, which is putting on a production of Top Gun - The Musical.

Don is ecstatic when he's given the part of Maverick but is less than pleased when he sees who will be playing Charlie. When Don injures the leading lady he convinces Sam to take the part. This is the last chance he has to impress her - and of course there is the stage kiss...

Eddie is rehearsing for his latest role in a production of Rain Man.

Don decides to join his local theatre club. Here is the song 'Guys' from their production of Top Gun: The Musical!