Don surprises himself when he takes pity on pretty homeless woman Susan, and Sam jokingly suggests that he ask her out.
Preview clip 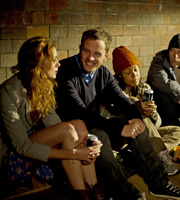 By the time Sam returns home with Brian, Susan is sitting comfortably on the sofa in their living room while Don runs her a bath. It doesn't take long before Sam brands Susan his "hobosexual".

The following day, Don doesn't want Susan to leave. He proposes a shopping trip, lunch and a visit to a gallery in a Pretty Woman-style day out. But it isn't long before Don's comments offend Susan and he finds himself agreeing to spend some time getting to know her friends in a bid to make up for it.

Meanwhile, on Sam's insistence, Don agrees to a night out with Brian and he takes Eddie along to fend off the boredom. Don soon has teetotal Brian downing shots to get the night going and they all move on to a lap-dancing bar. The consequences see Susan confronted by Don in addition to him covering up Brian's inevitable hangover the following day.

After lying to a homeless man, Don imagines the various people he couldn't say 'no' to.