Don has to face up to the fact that he blew his chance with flatmate Sam. To make matters worse, Sam has a new boyfriend who is everything Don isn't. Featuring guest star Noel Fielding.
Preview clip 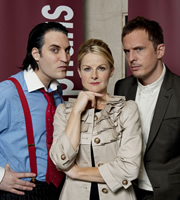 At the end of the last series things were looking up for Don as it seemed as though he was finally going to get it on with his flatmate, Sam. Things, however, didn't work out and now each day is a trial for Don as he has to face up to the fact that he blew his chance with her. To make matters worse, Sam has a new boyfriend who is everything Don isn't - he's mature, reliable, clever, he has a career and, to top it all, he's charming and handsome.

Don still doesn't have any real career path and is struggling to keep his part-time job. Embarrassed about his lack of direction Don comes up with an elaborate story about a new job. However, he's caught short when he runs into the happy couple when he should be at work. To save face and keep his story going he heads into the nearest office where he pretends to be the new temp.

Things finally appear to be going his way when a chance encounter with high-flying executive Marcus leads to a promotion. Of course, being Don, it's not long before it all starts to go wrong...

Keen to find out more about Brian, the new man in Sam's life, Don bullies Sam into revealing some details about the relationship.