The week doesn't start well for Don when he discovers that his hair is thinning. He is sent into a panic, but quickly arranges an appointment with a specialist to discuss a hair transplant.
Preview clip 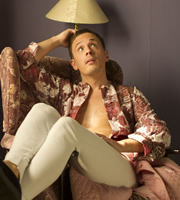 Don is down about his hair and things only get worse when he realises that he isn't the centre of attention. Things come to a head when everyone ignores him and he storms out.

When Eddie finds a letter about Don's appointment for a transplant he assumes the worst. Eddie, Sam, Brian and Mrs Treacher rally round to support Don in his final days. Don of course loves the attention and doesn't hesitate to make the most of the situation. He sends Brian packing before manipulating the house into pandering to his every need. It's not long before Sam is planning a farewell party...

4 Things Don Has Dreamt Of Doing

Believing that Don might be seriously ill, Sam suggests he makes a list of all the things he's dreamt of doing.