Christmas Special - It's A Don-Derful Life

It's Christmas time in the Danbury household and Don is making a final attempt to lead a normal life. But he has to contend with an out-of-control OAP, a violent Santa and someone close to home winning over his dream girl.
Preview clip 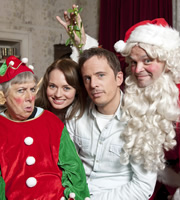 It's December in the Danbury household but there's nothing festive about Don's state of mind: the house is freezing because the boiler keeps breaking down; the toilet doesn't work; Mrs Treacher's losing the plot (and control of her bowels); Don's got a dead end job in a shoe shop and his friendship with Sam is no closer to becoming the romance he yearns for.

Things suddenly take a turn for the better when he receives news he has finally paid off his gran's debts and is free to sell the house. However, rather than winning Sam's heart it only drives them further apart as he impulsively sells to a property developer who plans to knock it down and Eddie has to put Treacher into an old people's home.

Just when Don thinks things couldn't get worse a rival man secures an invite to spend Christmas with Sam and her mum. Contemplating another lonely festive season by himself, without the woman he loves, Don manages to persuade Eddie and Treacher to help him film a music video for a song he has specially written for Sam and drop it off at her Mum's.

Which makes for a nailbiting and feelgood climax to three series of Don's attempts to grow up and find love.

It's Christmas time in the Danbury household and Don is finally starting to grow up. A trailer for the final special of How Not To Live Your Life.