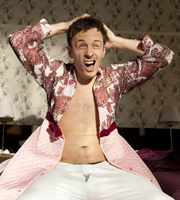 Having become close to winning the heart of his ideal woman, Abby, in the last series, Don suddenly finds himself bereft. Oblivious and newly single, Abby has opted for six months travelling to get over her ex-boyfriend - leaving Don with both a void in his life and a spare room to fill.
Preview clip

Don Danbury is missing Abby - can Eddie cheer him up?