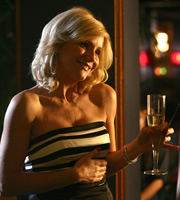 An exclusive dating agency is holding a "romantic event" at Babylon and Juliet is delighted when she bumps into her old friend, Karen.

Things have been hotting up in the relationship stakes between Juliet and Sam but he's just invited her to Hawaii and she can't get their troubled past out of her head. Unsure what to do, she confides in Karen. However, Karen's life isn't as rosy as she makes out and she bitterly reveals an explosive secret about Juliet to Sam. Juliet's blossoming relationship suddenly goes into free-fall.

On his night off, meanwhile, Tony is called back to the hotel to help a regular guest with a serious problem. However, it is not the guest who ends up in hot water with the police, but Tony, who finds himself facing serious charges and could lose everything.

Elsewhere, Ben decides it is make-over time for goofy receptionist Mel. With help from James and Tanya, Ben transforms Mel into a beautiful and sophisticated woman.