Babylon has secured an exclusive deal with an Italian glossy magazine to host a Royal wedding. When the wedding is called off, Sam makes plans to forge ahead regardless, using the hotel's staff as the wedding party. 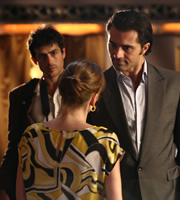 Babylon has secured an exclusive magazine deal to host a Royal wedding with Italian glossy magazine Certo!. When the wedding is called off, however, Juliet is astonished that Sam plans to forge ahead regardless, using the hotel's staff as the wedding party - Emily will be a princess from Lichtenstein, with Ben as her dashing groom.

Sam has received an unexpected tax bill and was relying on the money to pay off the balance. For once, Juliet decides to back his hair-brained scheme and helps the gang pull out all the stops. But, in spite of their fantastic efforts, the slippery magazine editor, Gennaro Fazio, exposes their game.

Elsewhere, Tony is tasked with looking after a teenage swimming prodigy, Mandy Warren, but quickly realises her managers, who are also her parents, are sucking her dry.

In the restaurant, meanwhile, James supervises a government trainee scheme and is surprised when a twinkly eyed octogenarian, Ken, turns up. James assumes the old codger is being a pest to a well-known food critic dining in the restaurant and has him demoted to the kitchens. But he's actually made quite an impression and James eats humble pie when he promotes him back to front of house.