Eve decides to enter her band into Britain's Got Talent. They're not very good but a misunderstanding could see her propelled to the final. Meanwhile, an anniversary get-away for Edgar and Wendy has surprises in store. 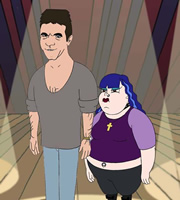 Eve decides to enter her band, Bloodmonkey, into Britain's Got Talent. They're not very good. But thanks to a misunderstanding, Simon Cowell thinks her parents are dead, and the sympathy vote looks like it might propel her all the way to the final (where she'll be up against an asthmatic girl in a wheelchair who plays the violin).

Meanwhile, Edgar and Wendy go away for their anniversary, but unknown to them their eldest son Dusty has stowed away as a surprise.

And Ken attempts to rekindle an old romance with Her Majesty the Queen - invoking the jealousy of his imaginary friend.