The British Olympic Synchronised Swimming team is in town to practice, and Joyce has persuaded them to stay at the Solana. 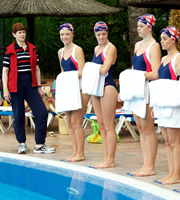 The British Olympic Synchronised Swimming team is in town to practice, and Joyce has persuaded them to stay at the Solana. Hazel, the team's strict coach, is shocked at the poor facilities, but agrees to Joyce's ambitious plan for a gala display in the hotel pool that night. The girls are due for a break from their rigorous training, and Liam escorts them (and Michael) on a sight seeing tour of beautiful Calpe - just along the coast.

Madge is very keen on handsome Mohammed - the son of a wealthy property developer who knew Mel. Mick and Janice are shocked to learn that Madge intends to marry him. She says it's a marriage of convenience, but how will she benefit?

At Calpe, Liam fails to stop the attractive young swimmers joining an 18-30 booze cruise, the very cruise that Trudy and Sam are heading for in search of some hot party action. But Danny won't let Trudy on board: she's too old. Or Michael: he's too young. Trudy - however - has a cunning plan.

What happens when the swimmers turn up drunk to the gala? And why does everyone end up in the pool? And what happens when Noreen locks herself and Gavin on a balcony, high out of ear-shot?