A night of reminiscing and revelation as Tom, Ben and Rachel help Matthew remember what happened to a missing childhood toy. If Matthew can track down his final Pog he will have a complete collection in mint condition and they'll all be rich.
Preview clips 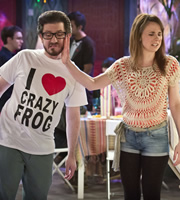 When a nostalgic television show reveals a complete collection of Pogs is worth hundreds of thousands of pounds, Matthew digs out his Pog album only to discover one Pog is missing, rendering the entire collection worthless.

If the group can remember the Pog's every move in the past and track it down in the present then they will be rich beyond their wildest dreams. But their dreams will have to wait as first they must recall the horrors of growing up in the Nineties and Noughties.

As they open the badults' box of memories, friendships falter under the strain of secrets that should have remained in the past with the Pog.

In this flashback, Tom returns from his travels.

Tom, Ben and Matthew discuss their plans for the future on the last day of school.