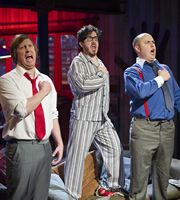 Matthew, Tom and Ben accidentally and massively overdraw from their joint account. With the banks closed till Tuesday the boys attempt to keep their unauthorised withdrawal of £5,000 from burning a hole in their collective pocket.

Matthew wants to lock the money away. Tom wants to speculate. Ben wants to order a mountain of takeaway food.

Rachel has her own adventurous weekend planned. Andrew's work has arranged a murder mystery weekend and she's off to guess who done it, leaving the boys to protect the cash.

The simple task of not spending money proves tricky for the badults. As the cash ebbs away Tom takes the advice of local bookie Aggressive Gary and turns to the gee-gees.

Matthew draws up a business plan, but Ben spies an opportunity for riches in one of Tom's smellier ideas.

Tensions rise and friendships unravel, eventually plunging the flat into civil war. Territory is divided, barriers erected, an aristocracy formed and peasants enslaved. All that remains is revolution. Will Rachel return in time?

Ben, Tom and Matthew plan to make the most of their bank holiday weekend. They want to splash out on food and drink so do the unthinkable and withdraw from the joint account.

The boys have been up all night hatching a plan to take on the stock exchange, but Tom decides to place their fortunes on Lady Luck... and other badly named horses.

Bloopers from the first episode. Ben, Matthew and Tom struggle to keep straight faces, and a pizza proves troublesome.