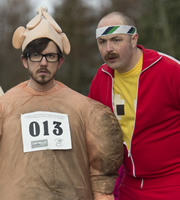 Matthew is determined not to end up on the wall of 'Disgraces to the Company'. Intimidatingly athletic co-worker Lucy looks a surefire bet to win until a startling revelation from Tom's childhood suggests that he might just be the man to coach Matthew to victory, but only if he can tear himself away from his one-man quest to eat a food from every country around the world.

When a trip to the farmers' market ends in Ben becoming a murderer (of a chicken), he packs in his obsession with meat. He's going cold turkey and refusing chilled poultry of any kind, but as the withdrawal sets in he finds himself struggling with his conscience to eat any living food, be it fruit, fish or vegetable. The inevitable hunger sends him slightly mad.