Tom, Ben and Matthew venture across the hall for the first time to meet their neighbours.
Preview clip 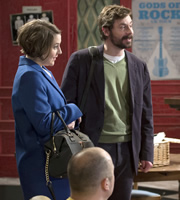 As Tom, Ben and Matthew venture across the hall for the first time, their neighbours' perfect lifestyle seems a little too perfect to Tom, who is convinced there's an evil secret lurking beneath their welcoming facade.

Ben is being decidedly less sociable. A new phone and an exciting new game - Furious Fruit - mean that his head is buried in his smart phone throwing irate melons.

Tom, Ben and Matthew try hard and fail spectacularly to make a good first impression with their new neighbours.