It's the big game and the Badults go to extraordinary lengths to see the match.
Preview clips 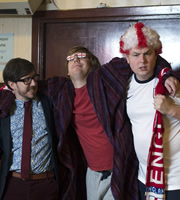 Come on England! It's the day of the big game and the pressure is on as Tom, Ben and Matthew go to extraordinary lengths to see the match. As the game kicks off, the TV in the flat explodes leading to a desperate dash around pubs, offices and old ladies' birthday parties to try and catch as much of the 90 minutes as possible.

It has been wins for England thus far in the tournament and Tom is convinced that bulldog spirit and superstition has been the recipe for success, so today he's making sure that everything is the same as it was for England's last victory in the 2014 World Cup. Ben and Matthew need to be sitting in the right place and Tom needs to be wearing the right wig and the right lucky pants.

Matthew is trying not to get on the wrong side of his patriotic (and slightly depressed) Scottish boss, Carabine. England and the World Cup are strictly no-go topics at Carabine Promotions, forcing Matthew to take the fantasy football league he's running underground.

Football's not such a big deal for Ben and he's planning to ditch watching the match to make his Nana's 90th birthday. Unfortunately Tom's tunnel vision to recreate the setting of the last win means Ben's not going anywhere and Tom will take the most drastic measures to ensure his pal stays put.

Will England win? Will the Badults see any of the game? One thing you can be sure of is that this World Cup special is going to penalties.

A trailer for the first episode of the second series.