In an attempt to stay on jobseekers allowance, Ben accidentally secures a job as vice president of Carabine Promotions.
Preview clip 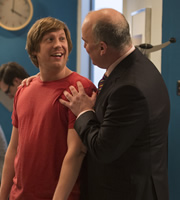 Professional brown nose Lucy is outraged at being overlooked for the position of vice president of Carabine Promotions.

Matthew is outraged that his lazy friend Ben is now not only his line manager but has also decided to make Matthew his PA and dogsbody.

Determined to find his fortune as a playwright, Tom is scripting a potentially award-winning play. Unfortunately, his muse is decidedly absent and he's struggling for inspiration until he takes Matthew's advice to 'write what you know' a tad too literally and transcribes all the action in the flat.

As the play about themselves spirals into farce, it is prosperous times at Carabine Promotions as Ben's lackadaisical attitude and lack of ideas somehow manages to inspire successful campaigns for Carabine's clients, making it harder for Lucy and Matthew to expose him.

Lucy and Matthew plot mutiny while Tom attempts to plot a finale.

Matthew prepares himself for a big meeting with Mr. Carabine, but first the dress code...