Carabine wants his company to get back its cool and, with Rachel injured, it's up to Matthew to prove to his boss he's hip and happening. Ben is busy aligning his chakras and Tom records a dance track.
Preview clips 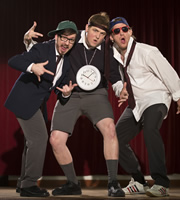 Injured and 'uncool', Rachel's sent home by Carabine and joins Tom and Ben for a rare day off, but far from relaxing she's quickly helping Tom record a dance anthem using a bleepy remote control.

Ben's managed to transport himself deep in to the realms of his subconscious where bizarre spirit guides, who look suspiciously like his flatmates, help him achieve enlightenment.

Matthew's been tasked with transforming the office vibe of Carabine Promotions but only manages to transform himself, as he attempts to be as rad as Awesome-Sauce radio star DJ Ribby.

For all three Badults the road to 'cool' makes for a fantastical journey of enlightenment, featuring spiders, scooters, centaurs, wet suits, hairy monks, chewable vitamin C and a handy poster on the wall.

Carabine Promotions has lost its vibe and Mr Carabine is looking to his staff for ideas.

Ben's been chanting when he meditates so Tom and Rachel have sampled it as part of a new dance anthem they've created.

There's an actual fire in the studio!