A situation comedy performed as part of Sitcom Mission 2012 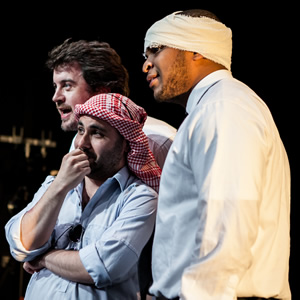 Winner of The Sitcom Mission 2012

Yo Valet centres on two valet parking attendants, Steve and Don, who work at a five star London hotel. Don is a brilliant and irritating young stand-up comedian; Steve is older, wiser and more cynical. Their boss is hotel manager, Kay. She also happens to be Steve's ex-girlfriend. She dumped him for losing his job in I.T. Steve desperately wants her back.

The fly in the ointment is Prince Khalifa; he owns the hotel and pretty much everything else. Son of a wealthy King, young and handsome, all Prince wants to do is party with the celebrities that stay in his hotel and drive his Lamborghini. So here's the situation, Don loves Don, Steve loves Kay, Kay might love the Prince. The Prince? Well he loves everything. With a thousand billion in the bank, wouldn't you?

Snez Naik originated from stand-up comedy, he won a gong show at his first attempt and never looked forward. After a while he decided that his writing is better than his performing. In fact a review of his stand-up once described him as, "not knowing what he was doing". He calls it "his best review yet". So, Snez wrote some sketches and auditioned for a sketch pilot. He got the part. He wrote and acted in some sketches, they were quite good and the pilot got filmed. It's on YouTube if you want to see. Snez decided to enter The Sitcom Mission in 2012, (he entered in 2011 but got nowhere as the market for a one draft sitcom about two brothers who run an Indian fast food takeaway, doesn't exist). In 2012 he is taking things more seriously and has written more scripts and sketches. His latest creation has had 14 drafts, this already makes him 14 times better than last year. Think how good he will be next year.