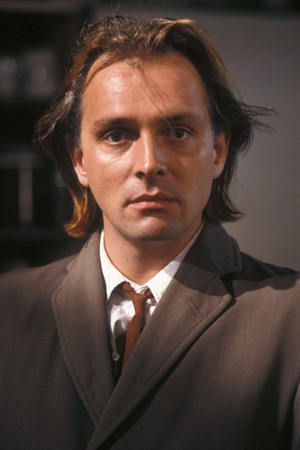 Rik Mayall, one of British comedy's most loved comic actors, has died.

The star of shows including The Young Ones, Bottom and The New Statesman was aged 56.

His long-term comedy partner Adrian Edmondson said today: "There were times when Rik and I were writing together when we almost died laughing. They were some of the most carefree stupid days I ever had, and I feel privileged to have shared them with him. And now he's died for real. Without me. Selfish bastard."

Mayall's manager, Roger Davidson commented: "It is a terrible shock. All we know at this stage is that Rik died at home. We are all deeply saddened by this news, from the enormous number of fans Rik had to those who worked with him and knew him as a man as well as a fine actor. He touched many lives, and always for the better."

His wife, Barbara Robbins, found him dead at their London home. Speaking this evening, she said: "We don't know yet what happened. He had a strong heart, so I don't think it was a heart attack. But we just don't know until the coroner's report. Maybe he had a fit, maybe it was his heart. We just don't know."

Rik Mayall had developed epilepsy after a serious quad-biking accident in 1998. He suffered two brain haemorrhages that left him in a coma for five days over Easter, and would go on to joke that this meant he had "beaten Jesus".

Doctors were considering turning off his life support machine when the actor started to show signs of life. Mayall said in an interview last year that he would mark the occasion by exchanging presents with his wife and children and said the near-death experience changed his life.

The Metropolitan Police confirmed that they were called to reports of the sudden death of a man in his 50s at 13:19 BST on Monday, in Barnes in south west London. The London Ambulance Service confirmed "a man, aged in his 50s, was pronounced dead at the scene".

The comedian married Barbara, a BBC Scotland make-up artist, in 1985. She survives him with their son and two daughters.

Rik Mayall was born Richard Michael Mayall on the 7th March 1958 in Matching Tye, a village near Harlow, Essex. His first moves into comedy were at Manchester University, where he first met his friend and comedy partner Adrian Edmondson. The duo initially performed under the name Twentieth Century Coyote.

Rising to fame upon the crest of the early 1980s' alternative comedy boom, Mayall appeared as Kevin Turvey in programmes such as A Kick Up The Eighties and performed alongside Edmondson as anarchic duo The Dangerous Brothers.

Mayall was also a regular on series such as Saturday Live, but became best known for his sitcom roles, including the ground-breaking and anarchic The Young Ones, plus Bottom and The New Statesman. 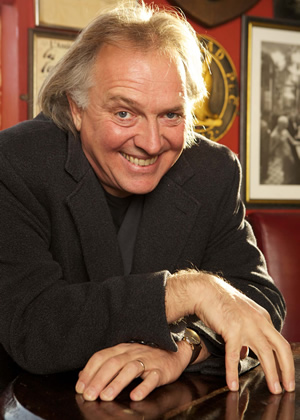 Following the success of The Young Ones (1982 - 1984), Mayall and Edmondson transported their characters to the 1987 sitcom Filthy, Rich & Catflap, refining them to even greater acclaim for Bottom. The BBC sitcom ran for three series from 1991, and made a hugely successful foray into live touring stage shows. A fifth and final Bottom Live toured Britain in 2003.

The programme was set to be brought back to TV in 2013 under the title Hooligan's Island (the name of the third stage show), however the idea was scrapped after the duo said the show "wasn't working".

Rik Mayall most recently co-starred with Greg Davies in new Channel 4 sitcom Man Down, a comedy based on Davies's own life. A second series, with Mayall reprising his role as Davies's eccentric father, was due to begin filming shortly. It is not yet known if this will now take place, or what changes may be made.

Davies said: "I am so sad to learn of the passing of Rik. He was my comedy hero. I could not believe that I got the opportunity to work with him and did not stop pinching myself throughout the filming. He was hilarious, warm and passionate on and off camera and being in his presence was always humbling. I cannot imagine how devastated his family, who he spoke of with such love, will be feeling and my thoughts are with them at this terribly sad time."

Also famed for roles in shows such as Believe Nothing and The Comic Strip Presents..., Mayall had in recent years appeared in Jonathan Creek as the wheelchair-bound D.I. Gideon Pryke.

Such was Mayall's talent that he gained his own showcase comedy series on ITV in the mid-1990s. Rik Mayall Presents ran for two series in 1993 and 1995. He also co-starred as a sultan in the final Carry On film, 1992's Carry On Columbus.

Aside from Man Down, one of Mayall's last projects was providing the voiceover to a short animated comedy film called Don't Fear Death.

Tributes have been pouring in from the comedy world, with many famous comedians expressing shock at the sudden and unexpected news. Charlie Brooker summed up many comments by tweeting: "Rik Mayall was just pure wiry, energetic, unpredictable humour poured into the shape of a human. You couldn't not watch him."

Ben Elton, who wrote and co-wrote many shows Mayall starred in, said: "I owe him so much. He changed my life utterly when he asked me to co-write The Young Ones with him, and he was with me on the day I met my wife. He always made me cry with laughter. Now he's just made me cry."

Nigel Planer said he was "very, very sad and upset that we've lost Rik, who was inspirational, bonkers, and a great life force". He also described the comic actor as "a brilliant comedian and someone who made everyone else's lives more fun. He will be really, really missed".

Blackadder producer John Lloyd told the BBC: "It's really a dreadful piece of news. He was the most extraordinarily good actor as well as being an amazing stand-up comic. Apart from being great company, he was a great professional."

Stephen Fry tweeted: "Simply distraught to hear of the death of Rik Mayall. An authentic comedy genius and a prince among men."

David Walliams has said: "I am heartbroken that my comedy idol growing up Rik Mayall has died. He made me want to be a comedian."

In his one and only post on the micro-blogging service, Mayall himself wrote: "Opening my very own Twitter to stop another bastard from doing it. So fuck off & don't expect to hear from me any time soon. Love Rik x"

Mayall published his autobiography - Bigger Than Hitler, Better Than Christ - in 2005.

Here is the BBC News report on Mayall's death:

The below video features highlights from Bottom:

In this clip, Rik Mayall introduces his character in Man Down:

One of Mayall's best guest starring roles was as Lord Flashheart in Blackadder. Here he makes a big entrance.