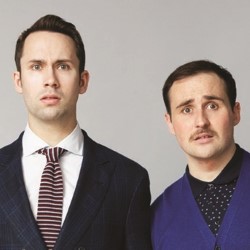 Say hello - and goodbye - to the inhabitants of Sudley-on-Sea, a decaying coastal town on the brink of destruction. The End is an epic tale about the meaning of birth, death, and the bit in between.

Max and Ivan have established themselves as the premier sketch act to see having garnered numerous awards and critical recognition. They have also starred in the BBC's hit comedy W1A, Matt Lucas's Pompidou and created The Casebook of Max and Ivan for BBC Radio 4, which guest-starred Reece Shearsmith, Matt Lucas, Jessica Hynes and June Whitfield.

The duo - Max Olesker and Ivan Gonzalez - were nominated for the Foster's Edinburgh Comedy Best Show Award for their last show, The Reunion, at the Fringe in 2013 - the only sketch act to be shortlisted. On the show, the Daily Telegraph wrote that it 'recalls the verbal invention and dark surrealism of The League of Gentlemen', The Times added it was 'ingenious, amusing and it dare[d] to have a heart too', The Independent surmised that 'by the time the feel-good ending hits, it's impossible to stop beaming. A joyous hour' and The Guardian concluded that 'Max and Ivan are the real deal.'

Max and Ivan: The End - which is directed once again by Tom Parry (Pappy's) - recently premiered at the Adelaide Fringe and Melbourne International Comedy Festival, where it received five star reviews.

Also making a return with Max and Ivan is their Foster's Edinburgh Comedy Award-winning creation The Wrestling, which will once again see comedians risk life and limb taking on professional wrestlers in the Pleasance Grand - this time, in a 20-person Battle Royale to crown The Wrestling's first ever undisputed Champion.