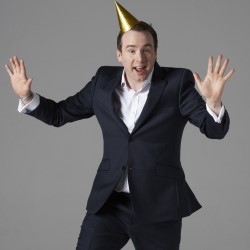 Up to the minute satire inevitability affected by the outcome of an election, which at the time of writing had not taken place and when a Green/BNP election was just a pipe dream. As seen on Have I Got News for You (BBC One), Rory Bremner's Coalition Report (BBC Two) and Question Time (BBC One). 'Singlehandedly fulfilling comedy's brief of taking our political masters to task. Combining spot-on impressions with up to the minute observations' **** (Mail on Sunday). 'Smooth as silk. Brings confidence and energy to political satire' **** (Edinburgh Festivals Magazine).

Following a sell-out 2014 Edinburgh, Soho Theatre run and UK tour, Matt Forde returns with a brand new stand-up show, Get The Political Party Started. With up to the minute political observations, satire and impressions of some of the UK's leading Westminster figures, Matt will tackle some of the many great questions facing our country in the aftermath of the election... What effect will the SNP have on Parliament? Will David Cameron serve a full third term? Does Andy Burnham wear mascara?

A former advisor to the Labour Party, Matt Forde is fast becoming acknowledged as the UK's leading political comic and has appeared on Have I Got News For You (BBC One), Mock The Week (BBC Two), Rory Bremner's Coalition Report and Rory Bremner's Election Report (BBC Two), 8 out of 10 Cats (Channel 4), Question Time (BBC One), This Week (BBC One), Newsnight (BBC Two), Daily Politics (BBC Two) and Russell Howard's Good News (BBC Three). He also starred alongside Jon Richardson in Channel 4's Jon Richardson Grows Up.

Matt Forde's London show, The Political Party, has been a sell-out during its monthly residency at Westminster's St James Theatre. Matt has brought Parliament to life with his stand-up and debate with some of the Government's most notorious figures, including Alastair Campbell, Michael Portillo, Night Farage, Neil Kinnock, Alan Johnson, John Prescott, Jack Straw, Dame Tessa Jowell, George Galloway, Jim Murphy and Charles Clarke. The show is also released as a podcast which has amassed over 100,000 downloads on Soundcloud, hit the top spot of the iTunes comedy chart, was picked as the Daily Telegraph's podcast of the week, and was nominated for the Internet Award in the 2015 Chortle Awards.