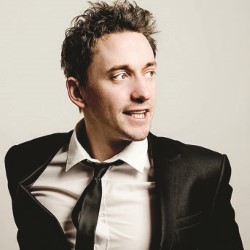 John Robins, who won Best Compere at this year's Chortle Comedy Awards will be performing his 7th hour at this years Edinburgh Festival. John began writing Speakeasy, the morning he received a text from his girlfriend to say that she'd forgotten to sign out of Google on his computer, and as a result could see "EVERYTHING YOU'VE SEARCHED FOR" (direct quote). It's a show that explores how we present ourselves to the world and how we communicate with others, be it two drunk strangers on a flight to Norway, the people we love most dearly, or untold millions online.

His previous hour-long Edinburgh shows were Skinny Love (2009), Nomadic Revery (2010), Lift Your Skinny Fists Like Antennas To Heaven (2011), Incredible Scenes! (2012), Where is My Mind? (2013) and last year's This Tornado Loves You. After acclaimed appearances in the improvised stand up show Set List at Edinburgh & London, John now holds a regular slot on the show.

He has hosted a weekly show on XFM radio with his pal Elis James for the past 14 months, in the same slot that launched the careers of Ricky Gervais, Jimmy Carr and Adam & Joe! The podcast has a devoted following and is constantly in the Top Ten comedy podcasts in the UK. Last year he performed at New Zealand's International Comedy Festival.