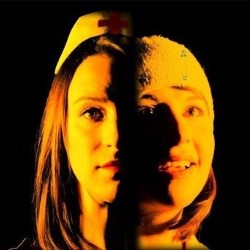 Feuding sisters have never been closer, mainly because Lizzie has bumped her head and is suffering from memory loss. Luckily doting sister Sarah is there to teach her a lesson. Toby - Sarah and Lizzie Daykin - became an underground cult hit with their 2010 debut and their refreshing approach to sketch comedy won them rave reviews for their 2011 show Lucky. They return with their hotly anticipated third show. Stars of Live at the Electric (BBC 3), Anna and Katy (Channel 4), Dead Boss (BBC 3), Chickens (Sky 1). ***** (Fest). **** (Scotsman). **** (Guardian). **** (Independent).

Cult sketch duo made up of real life sister Lizzie and Sarah Daykin, Toby, return to Edinburgh with a brand new show regaling more tales of sisterly love / rivalry. Hugely acclaimed in their previous two Fringes and have been seen on things like Live at the Electric (BBC Three), Anna and Katy (C4), Dead Boss (BBC Three) and Chickens (Sky1) since. Dark, odd and hilarious, Toby are unlike any other sketch act on the Fringe.