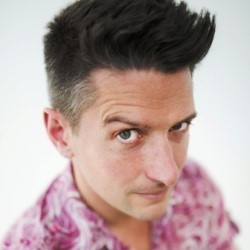 Stuart Goldsmith returns to the Edinburgh Festival after a critically-acclaimed trilogy of shows from The Reasonable Man in 2010 ("One of the best debut shows I have ever seen" Scotsman) to Another Lovely Crisis in 2011 ("Simultaneously side-splitting and heartbreaking" ThreeWeeks) to Prick in 2012 ("Perfectly nailed timing and delivery... A rock-solid hour" Chortle). Last year he treated the Fringe to a run of live shows of his double Chortle-nominated podcast, The Comedian's Comedian, which Alex Hardy of The Times recently called "consistently entertaining and startlingly honest".

Goldsmith has been happily squandering his life in the pursuit of standup and hedonism, but now the parenting bomb is ticking down. In Extra Life Stu explores the dynamic between wanting to stay forever young, and needing to grow the hell up.

Being a comedian used to mean late nights and parties, but the unexpected cost is floating around on weekdays like an unemployed ghost, pressing his face against office windows and yearning for water-cooler chat. His girlfriend has a proper job a hundred miles away, so stark reality is nipping at his heels. It's make-your-mind-up time: grow old disgracefully or shut up and spawn!

Stuart is an internationally award-winning comedian, with a reputation for smart, accessible comedy. His enthusiasm and charm conceal a quick wit, refined by a youth magnificently misspent as a street-performer. A dab hand with a one-liner, he revels in wringing laughs from the truth about love, romance and the downside of getting what you want.

Not only did he survive ITV1's Show Me The Funny with dignity intact, but he's also a Malcolm Hardee Award winner and a triple Chortle Award nominee. Off the stage, his Comedian's Comedian Podcast is beloved of the comedy circuit, with recent episodes exploring the creative secrets of Tim Vine, Sarah Millican and Greg Proops.