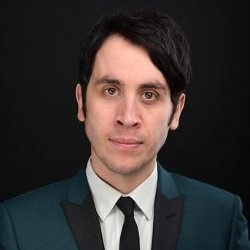 After sell-out performances in 2013, 'the UK's leading comedy magician' (Time Out) returns to Edinburgh with an astonishing new show. Seen on BBC2's The Sarah Millican Television Programme, Channel 4's Comedy Mash-Up and star of BBC1's The Magicians. Expect Pete's trademark blend of crowd-pleasing comedy and jaw-dropping magic. This is a show not to be missed! 'The man from Middlesbrough sets the pace for comedy-meets-magic in the 21st century' (Times). 'The new poster-boy for British comedy magic' (Telegraph). 'Impressive, well-executed illusions delivered with the same speed and lightness of touch as his surgically-precise one-liners' (List).

You've seen him on TV, now prepare to 'ooohhh', 'aaahhh' and wonder how on earth he did that, as Pete Firman returns to the Edinburgh Festival from 30th July to 24th August with his new show Trickster.

He's wowed television viewers, but you ain't seen nothing until you've seen Pete Firman live and up-close. Constantly pushing himself and his audience, it's hard not to be flabbergasted by both his quick wit and his astonishing illusions. Comedy and magic have never gone so well together!

Pete has a list of TV credits as impressive as the tricks themselves. He starred in BBC1's prime-time Saturday night programme The Magicians and his skill for fusing magic and comedy has made him one of the most in demand magicians working on British television, writing and performing in magic shows such as Monkey Magic (Channel 5), Dirty Tricks, Derren Brown's 3D Magic Spectacular (Channel 4) and The Secret World of Magic (Sky One). He has also made dozens of guest appearances on programmes like The One Show, BBC Breakfast, The Sarah Millican Television Programme, Celebrity Mastermind, Gordon Ramsay's Cookalong Live, Comedy Rocks with Jason Manford, This Morning, Edinburgh Comedy Fest Live, Comedy Cuts, Saturday Live Again! and Something For the Weekend.

He is also an accomplished television presenter, hosting Stakeout (BBC1), Wait for It (BBC1) and The Body Shocking Show (E4). As an author, he successfully penned his first book Tricks to Freak Out Your Friends, a beginners magic book for the 21st century, which was released both in the UK and the USA. Pete has performed in the UK and internationally, including shows at the Just For Laughs Festival in Montreal, which is by invitation only. He has toured the UK with four solo theatre shows, most recently Hoodwinker in 2013. This year will be his eighth consecutive Edinburgh Festival.