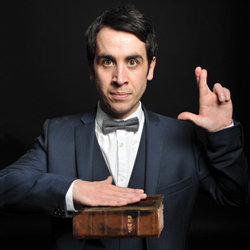 Don't miss Pete Firman, 'the new poster-boy for British comedy magic' (Telegraph), as he returns to Edinburgh with an all-new box of tricks. Fresh from BBC1's The Magicians, with his own trademark blend of comedy and jaw-dropping magic, this is a show not to be missed! 'The man from Middlesbrough sets the pace for comedy-meets-magic in the 21st century' (Times). 'Firman is responsible for making it socially acceptable to say that you like magic again' (Guardian). 'The best magic tricks in the universe' (Independent).

The Star of BBC1's The Magicians, Pete Firman returns to Edinburgh Festival Fringe this year with an all-new box of tricks.

Packed to the hilt with Pete's very own trademark blend of comedy and jaw-dropping magic, this is a show not to be missed!

Pete most recently captivated audiences of all ages when he starred in BBC1's primetime magic show The Magicians before setting out on a hugely successful tour of the UK with his live show Jiggery Pokery which was such a hit at Edinburgh Festival Fringe 2011.

Pete Firman first burst onto our television screens as cheeky Northerner 'Tufty' in Monkey Magic (Channel5). Since then he has travelled the world meeting his magic heroes and performing his own brand of anarchic magic in The Secret World Of Magic (Sky One) and amazed viewers by performing disgusting tricks with animals, cigarettes and big spiky things in Dirty Tricks (CH4). Other television appearances include The Culture Show (BBC2), Don't Miss A Trick (BBC1), Derren Brown's 3D Magic Spectacular (CH4), Saturday Live Again!, Jason Manford's Comedy Rocks (all ITV1), and helping Justin Lee Collins become a conjuror on The Convention Crasher (CH4).

He also presents the game shows Stake Out and Wait For It...! for BBC1 and has had two other successful UK tours - Flim-Flam in 2008 and Jokes & Tricks in 2010.

Pete is a published author and his first book, Tricks To Freak Out Your Friends was also released in the USA and is about to go into its second printing.