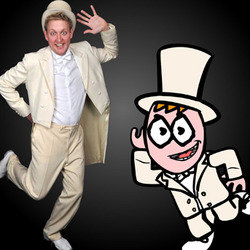 Big Howard and Little Howard, the human/cartoon double act and stars of The Royal Variety Performance, CBBC's The Slammer and Little Howard's Big Question are back with their unique family comedy show. A sinister figure threatens our heroes and the only way to thwart him is by putting on the funniest show on the Fringe (in their age bracket). Award-winning children's comedy with real groundbreaking animations live on stage, answering back. 'Incredibly, achingly funny' (Daily Mail). 'The best show we've seen at the Edinburgh Festival' (Families Magazine). 'One of the best kid's shows' (Scotsman).

Little Howard is the world's only live interactive animation. He's won so many awards and fantastic reviews and he's only just celebrated his 6th birthday (for the tenth year in a row!) He's also a published author and has done lots of television stuff, like The Royal Variety Performance, The Slammer (CBBC) and Little Howard's Big Question (BBC One) - yes, he's even had his own television show!

Yet Little Howard is true to his roots and live theatre is still his first love. But life is tough in showbiz; Little Howard's big new act keeps going wrong, Roger the Pigeon has spent all their money on cookie cutters, his comedy counterpart Big Howard has been diagnosed with being clinically unfunny and there's a slug in the backstage toilet. And it's about to get worse: a sinister figure arrives and Big Howard and Little Howard have to put on the best show of their lives to keep themselves out of jail! And so, this August, they will be returning to the Fringe with one of the most unique family comedy shows ever.

Little Howard is the creation of Howard Read and together they have enjoyed a nomination for the prestigious Perrier Award, three smash hit series of their acclaimed BBC One show Little Howard's Big Question, interviews together on This Morning (ITV1) and BBC Radio 1, published two books (Little Howard's Unpleasant Lullaby and Little Howard's Big Book), performed for the Queen and toured all over the world together. When Little Howard has gone to bed, Big Howard has been busy creating critically acclaimed characters on TV and radio for the likes of Richard Briers, Rik Mayall, Mark Gattis, Una Stubbs, Rula Lenska and Tim Brooke-Taylor. He has appeared on The Tonight Show with Jay Leno and various programmes on BBC Radio 4 and animated on several tours for Ross Noble. Oh, and he'll also be at the Fringe in his own show, Hide and Speak, but Little Howard doesn't know that yet...