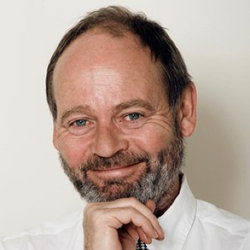 The founder of QI, Blackadder and Spitting Image and 'comedy mastermind' (Chortle.co.uk) returns to his roots as writer/performer with a hilarious take on The Meaning of Liff and other quite interesting stuff. Book early!

John Lloyd, the man behind some of the greatest television comedies of the last 30 years - Not The Nine O'Clock News, Blackadder, Spitting Image and QI - steps out from the shadows to debut his own hilarious live solo show at the Underbelly Dairy Room at the Edinburgh Festival Fringe this August.

John Lloyd began as a writer/performer in Footlights but was rapidly sidetracked into radio where he started The News Quiz and To The Manor Born and co-wrote the first series of The Hitchhiker's Guide To The Galaxy with Douglas Adams. He has not appeared on a Fringe stage since he, Douglas and David Renwick (writer of One Foot in the Grave and Jonathan Creek) brought their sell-out revue The Unpleasantness At Brodie's Close to Edinburgh in 1976.

Co-author with Douglas Adams of The Meaning of Liff, and presenter of Radio 4's The Museum of Curiosity, John has also directed dozens of TV commercials - starring Rowan Atkinson, Leslie Nielsen, Dawn French, Hugh Laurie, Stephen Fry, Harry Enfield, Alan Davies and John Cleese - and, due to a strange anomaly, has won more BAFTA Awards than anyone in the world except Dame Judi Dench.

In this belated attempt to become a legend in his own teatime, expect insight, interestingness, outrageous insider gossip and many, many laughs.

Don't miss your chance to catch one of British media's most illustrious yet deeply modest men before he becomes an immensely rich and famous pain in the arse...