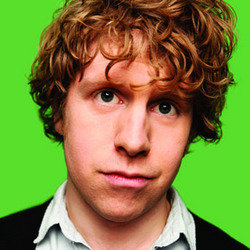 Hotly anticipated follow-up to 2011's Fosters Newcomer nominated debut from the star of Live at the Apollo, Stand Up for the Week, 8 Out of 10 Cats and Rob Brydon Show. 'This is one of the most individual, accomplished, hilarious and unforgettable hours I have had this year' (Scotsman). www.offthekerb.co.uk

2011's Foster's Edinburgh Comedy Awards Best Newcomer nominee Josh Widdicombe returns to the festival this year with his hotly-anticipated follow up to his sell out debut show. Josh will be playing The Further Adventures Of... to audiences daily from 1st - 26th August (excluding Monday 13th and Thursday 23rd August) at the Pleasance Beneath.

Star of Channel 4's Stand Up For The Week and BBC One's Live At The Apollo, Josh's eagerly awaited brand new show deals with his inability to embrace adventure in his life, his continued frustration with everything he comes into contact with. Unable to relax and enjoy life, Josh has instead decided it is everyone else that is at fault for his lack of enthusiasm for leaving the house.

Now regarded as one of the best up-and-coming acts in the UK, Josh is in constant demand at clubs and theatres across the nation both in his solo shows and as support for the likes of Stephen Merchant, Alan Carr, Kevin Bridges and Michael McIntyre.

Outside the realms of stand-up, Josh has been busy taking part as a regular in two series of Channel 4's Stand Up For The Week, Channel 4's Comedy Gala 2012 (live at the O2), Mock The Week (BBC One), The Rob Brydon Show (BBC Two), 8 Out Of 10 Cats (Channel 4), Edinburgh Comedy Fest Live (BBC Three, BBC Radio 4's Loose Ends, Arthur Smith's Balham Bash, BBC Radio 5Live's Fighting Talk and Absolute Radio's Rock n' Roll Football. Also an accomplished writer, Josh has written regularly for Guardian Sports online plus TV shows such as Mock The Week and 8 Out Of 10 Cats.

Josh will be touring the UK this autumn. Visit www.offthekerb.co.uk for further information and dates.