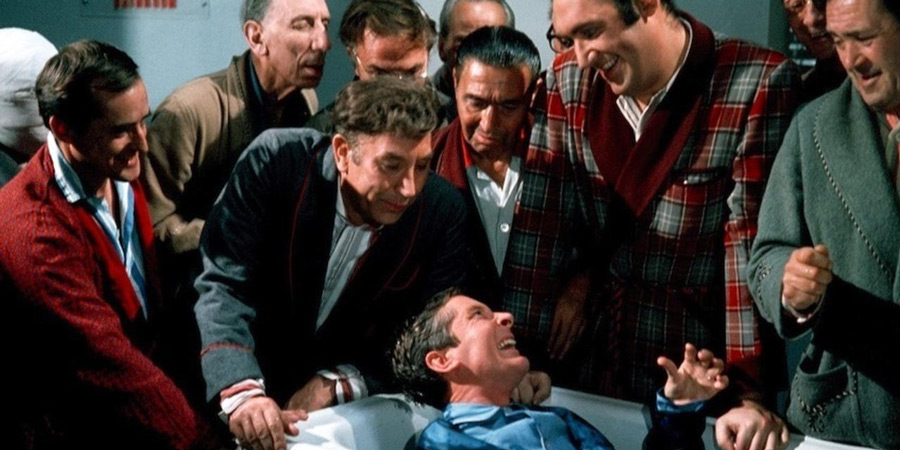 Frankie Howerd joins the Carry On regulars in a hospital-based adventure. With Sid James, Jim Dale and Kenneth Williams

Life at Borough County Hospital is, if not a little tedious, then certainly rather relaxed. There's the formidable Matron to contend with, and Dr. Tinkle isn't an awful lot better, but the nurses are kind and attentive, and some patients - notably Charlie Roper, who appears to suffer from nothing more than acute laziness - are in no hurry to leave.

Summoned by Matron to inspect a new patient, the clumsy but affable Dr. Kilmore is most amused to recognise his latest charge as one Francis Bigger, a motivational speaker and faith healer who travels the country preaching the virtues of "mind over matter" and the ineffectiveness of medicine. It seems that Mr Bigger took his mind off the matter of his surroundings - after an x-ray it transpires he is suffering from nothing more than a bruised bottom, but Bigger's nosiness and mild hypochondria lead him to believe he has only days to live!

Meanwhile, blonde sauce-pot Sandra May is the newest member of the nursing staff. Taking to the roof of the nurse's quarters to sunbathe during her time off-shift, she catches the eye of Kilmore and Nurse Clarke, who believe she is about to jump! As Kilmore mounts a daring rescue attempt, events on the rooftop go somewhat awry and it is he who is in need of saving.

Stitched up by Matron and Tinkle, Kilmore finds himself dismissed from his post. The patients, lead by Roper and nice-but-dim Ken Biddle, are infuriated by the injustice of the duo's actions and decide they have had enough. Breaking from their wards, the men set about Tinkle, and the women about Matron, threatening them with an enema and a cloth-wash respectively, if they do not sign documents admitting that they had conspired to have Kilmore fired by lying about his conduct. But will either give in?