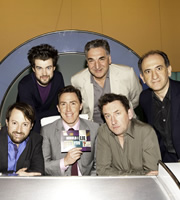 There was a four-week break between Episodes 7 and 8 due to coverage of the Queen's Diamond Jubilee celebrations and Euro 2012 football games. In some places this episode may be listed as having been on Thursday 21st June 2012... this was its initial schedule slot, however BBC One opted to show the football.

Did a Young Jack Whitehall Hide a Girl Under His Bed?

Did Jack Whitehall hide a girl under his bed whilst his whole family came into his room?