About Would I Lie To You? 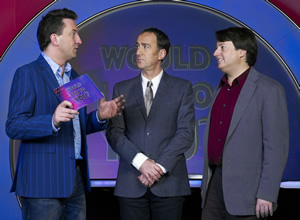 Would I Lie To You? is a BBC One panel show originally hosted by Angus Deayton, but now fronted by Rob Brydon.

Featuring David Mitchell and Lee Mack as team captains, the show presents a profusion of unbelievable truths and believable lies. All the teams have to do is hoodwink each other into believing that what is fake is true, and what is true is fake.

Each episode sees two celebrity guests join each team. They then compete head-to-head with each player revealing incredible facts and embarrassing personal tales for the consideration of the opposing team. Some of the yarns are true, some are not, and it's the panellists' task to separate the facts from the fabrications.

For example, in Series 1, amongst other things, Mitchell had to convince Mack's team that he fainted during a screening of Kill Bill and had a poster of Margaret Thatcher on his wall as a teenager (both false). Other lies have included Vic Reeves claiming he had fixed psychologist Dr Raj Persaud's computer by rebooting it; and Eamonn Holmes owning a different cat for each day of the week.

However, the truths told are almost as un-believable as the lies. During Series 1 we discovered John Barrowman really did urinate in Prince Charles's garden; Len Goodman accidentally killed a falcon with a golf ball; and Tara Palmer-Tomkinson once swallowed a very expensive diamond. Series 2 unearthed truths such as the fact that David Mitchell's first word was 'hoover'; Frankie Boyle was rated 98% on a psychopath test; and David Baddiel has snogged two of the Spice Girls (see our series guides for lists of the truths and lies). 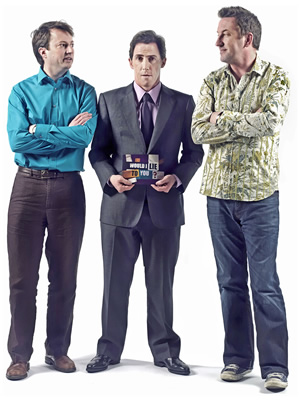 Would I Lie To You? is actually less a test of the panellists' powers of lie-detection, but more about their ability to talk funny, convincing nonsense. After all, as with all good panel shows, it's all about making the audience laugh!

Home Truths: The panelists must read out a statement about themselves (often an embarrassing one). The opposing team must then decide whether their statement is true or false.

Ring of Truth (early series): A 'fact' about a celebrity is read out. Both teams must then reach a decision as to whether it is true or false. For example, in one of the episodes the teams had to decide whether Gwyneth Paltrow once said she would rather die than let her child eat a Cup-A-Soup. (Answer: She did!)

This is My...: A mystery guest person is brought into the studio and each of the panellists on one team will then introduce them to the opposing team, explaining their relationship (for example: he's my hairdresser). However, only one of them actually knows the person they're introducing. The mystery guest must not talk, but the opposing team can question the other team. Often the two lying panellists are quickly found out as they dig themselves into holes they cannot get out of (Mack is particularly bad at lying in this round, with hilarious consequences).

Quick-Fire Final Round: This round is similar to the first, but it is conducted against the clock. Sometimes the guest encounters a prop.

The first series of Would I Lie To You? went out on Saturday evenings in 2007. Whilst not an overnight hit it proved enough of a success to secure a recommission and a move to a prime-time Friday night 9pm slot. The second series, broadcast in 2008, also saw the number of episodes extended from six to eight.

The comedy panel show returned for a third series on Monday nights in August 2009 with brand new host Rob Brydon.

From Series 4 onwards the show found a new home on Friday nights, where it has since gone on to win many awards.