A stalwart of British farce on stage and screen, Terry Scott starred in some of the most memorable Carry On films as well as long-running BBC sitcom Terry & June. 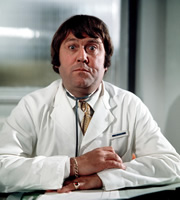 Terry Scott was one of TV's best loved stars, whose extensive showbiz career is showcased in this 30 minute long documentary. The show features archive footage of the comedy favourite in a host of his best loved TV shows, as well as other highlights from his career. As well as featuring many clips there will be special guest interviews from co-stars, family members and friends.

His best-loved role was almost certainly as bumbling Terry Medford in the popular domestic sitcom Terry & June, which had begun life in 1974 under the title Happy Ever After, starring alongside June Whitfield. The two played a happily-married, middle-aged, middle-class suburban couple. June wanted a quiet life, but Terry had a knack for getting into difficulties and causing problems which invariably resulted in laugh-out-loud lines ("Jooooon!") - which were hugely popular with mainstream primetime audiences.

Terry Scott also appeared in earlier television hits such as Hugh And I and was also the voice of Penfold the hamster in the popular 1980s animated series Danger Mouse. As a tireless comedy performer, he was not only one of Britain's top TV stars, but also a stalwart of theatre - and, for many, the quintessential pantomime dame.